Pete vs Andre: A Rivalry Revisited 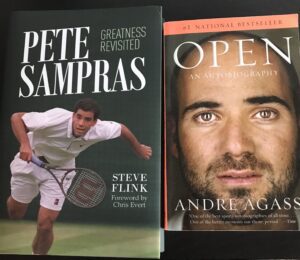 As the tennis world embarks on the 20th anniversary of the last professional match played between Pete Sampras and Andre Agassi[1], the question is asked, “what makes a great rivalry”? Do two individuals have to hate each other? I’d say no. Just look at Mr. Federer and Mr. Nadal. Do two individuals have to have contrasting styles? I’d say it would definitely help, but not necessarily an absolute. Do the two individuals have to be close in terms of skill-set and achievement? I would say the answer to that question is yes. After all, can there really be a rivalry if it’s so one-sided that there was never any doubt about who would come out victorious?

As Agassi was in the US Open final just a short time later, surely Agassi would not let this opportunity slip. Yet there was Sampras riding a wave of playing some amazing tennis in beating Ivan Lendl and John McEnroe to get into the final. As both Agassi and Sampras walked onto that court that Sunday in early September, I’m sure the tennis world was expecting Agassi to win his first grand slam title. The only problem was that the young Sampras came out on fire. Sampras stayed hot for the entire match which resulted in a straight set victory to win his first grand slam title.

Many view the most important match in this rivalry was the 1995 US Open final. Agassi and Sampras were really in their peak form during this year. They played in the finals of the Australian Open which Agassi won. They then played in back-to-to-back finals in Indian Wells and Miami (Sampras won Indian Wells and Agassi won Miami). After losing to Boris Becker in the semifinals of Wimbledon after being up a set and two breaks, Agassi quickly put that loss behind him and won pretty much everything in sight in the summer hardcourt swing leading up the US Open. He beat Stefan Edberg for the title in Washington D.C. He closed out Sampras in three sets to win Montreal’s Rogers Cup. He beat Michael Chang in the finals to win Cincinnati. Agassi also saved two match points against Richard Krajicek at New Haven before winning that title.

Sampras had won Wimbledon, and while his summer hardcourt swing leading up to the US Open was not as impressive as Agassi’s performances, Sampras was still in good form entering the US Open. Everyone agreed, including Sampras and Agassi, that the winner of this match determined the best player in the world.

As was often the case in the biggest matches which these two competitors played, Sampras came out on top winning in four sets. The turning point in this match included a scintillating nineteen-stroke rally won by Sampras to capture the first set. At the time, and for the following two years, the result of this specific match had quite devastating consequences for Agassi. Agassi’s ranking sunk all the way down to 141 in the world and there was a serious question if Agassi would ever climb back to the top of the rankings. Thankfully for both Agassi and for the tennis world, he did climb back to number one in the world in 1999.

Many people say that the best match of this rivalry was at the 2001 US Open quarterfinal contest where not one service break occurred during the entire match. Four tiebreakers determined the outcome of this match. Agassi won the first tiebreak, followed by Sampras winning the second, third and fourth set tiebreaks. An amazing moment happened prior to that fourth set tiebreak where everyone in attendance stood up and gave both players a standing ovation. What was even better was that both players acknowledged such recognition. There are few moments in sports where something as magical as this exists in the middle of a contest. As many people thought this standing ovation was a reflection of the amazing display on court that evening, Hall of Famer and Tennis Historian Steve Flink had another view on it. Flink remarked that he did not think the fans were applauding just for this one match. Flink continued to state that he felt it was the fans thanking both Sampras and Agassi for everything they had done throughout their entire careers [2].

The two men would meet again for what was Sampras’ final professional match of his tennis career at the finals of the 2002 US Open final. Sampras prevailed again, winning in four sets.

It’s pretty clear to the tennis world that between the white lines, Sampras got the better of Agassi. Sampras led the all-time series 20 matches to 14, with the most telling stat of Sampras beating Agassi 4-1 in grand slam finals (Agassi’s sole win was in the 1995 Australian Final).

When looking outside the white lines, I think there could be a strong case that Agassi had more of an impact on the game of tennis as a whole. Agassi was really the first player to stand on the baseline and hit big on both the forehand and backhand wings. There were a few players that had big forehands prior to Agassi, but no one really took the ball that early and hit aggressively from both sides. Agassi also made quite an impact with his style. From the denim shorts to the hot lava, Agassi had a way of bringing so many fans into the sport of tennis.

The tennis world was blessed to have both Pete Sampras and Andre Agassi. It was such a compelling rivalry from both a personality style and from a playing standpoint. Agassi’s former coach Brad Gilbert may have the most telling quote when referring to Pete Sampras as a summation to this rivalry, “As a coach, that guy… still, I have no hair, grey hair, that guy, he owes me, but it is what it is.[3] ”

Video-only link to podcast episode can be found at: https://www.youtube.com/watch?v=-Re9uahAA64&t=7s

Video-only link to podcast episode can be found at: https://www.youtube.com/watch?v=IZLYqkMLoto&t=6s